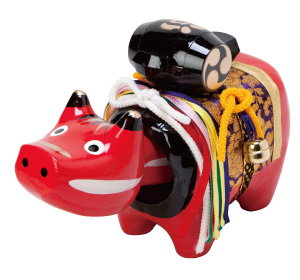 This is a ” Aka Beko, red cow” of the folk toy of Aizu in Fukushima prefecture in Tohoku.

The style giving a shake at a neck to and fro is very pretty.
The ” Beko” is meaning of a cow as northern Japanese dialect.

My grandma collected folk toys from northern Japan. When I was child, I was wondering about Aka Beko, red cow, toy. It was so cute and the neck was moving to and fro funny way. And, it seemed something special. I was more interested in the Hello kitty or the Mickey Mouse than Aka Beko that time. But, I realise that Aka Beko must be the respected Japanese folk toy. 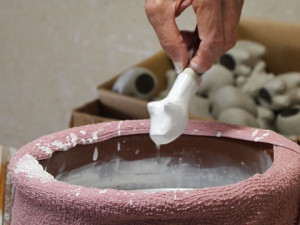 400 years ago,prince Gamō Ujisato who was Aizu feudal lord invited a puppeteer from Kyoto for increasing  production promotion. Samurais, who were no duty of the inside of the feudal clans, learned the technique, and it spread out as a side job.From their side job, the papier-mâché doll was made, that reflected their original lifestyle and faith . One of them is  the “Aka Beko, red cow”. 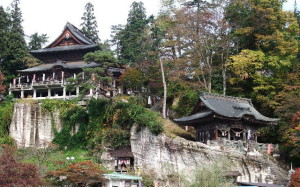 “福満虚空蔵尊円蔵寺, hukumankokuuzousonenjiuji” in Yanaizu city , Fukushima prefecture, Tohoku, where is said to be Aka Beko’s birthplace. It dates back to erection of Kokuzodo that is the main hall of a Buddhist temple 1,200 years ago.Many horses and cows were employed to carry huge wood on a rocky mountain.However, many horse cows fall down to the dangerous path. One cow with red hair was the only one that survived to the end of the project. 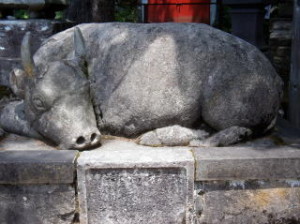 This red cow seemed to disappear in dawn of the Kokuzodo completion.
It was said by people that this must be the saving grace of God.
This legendary red cow is often made into a papier-mâché motif called Aka Beko.