The Chindonya is a local showy advertisement. They mainly advertise new product or new opened shop. They attract people by playing Chindon drum, which is combining of Japanese drum and gong, and wearing Edo period’s clothes. It’s a old contract advertising business in Japan. 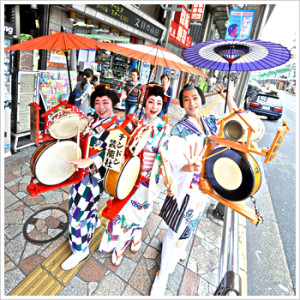 In Edo period, a candy sales man was a one of occupation. The sales man play a gong or a drum then calling statements for gathering people. Then, he sold candy.

It was 1845, more than 150 years ago. A candy sales man from Edo, Amekatsu , started contract advertising business the first time. Even though it was the simple performances, statements, gesture, beating wooden clappers or mimics, it became so popular. It’s said that this is the origin of the Chindonya. 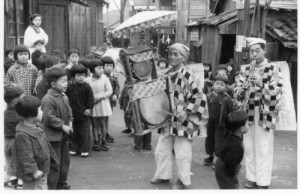 Chindonya play fun music and parade through the city. Then calling out to each people about marketing messages. They help the announcement of the opening of a shop, the campaign of new product, event or parade. 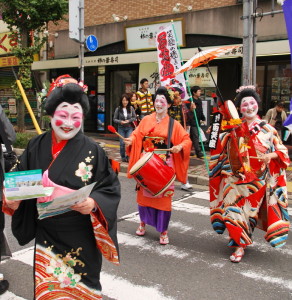 Generally, member of Chindonya are around 3 to 5 people. Mainly, members are a boss, musician, flag folder and a person, who pass out leaflets. A boss is normally in charge of playing Chindon drum and doing  the statement as additional post. The musician plays a melody with the wind instruments such as a clarinet and a sax. The flag holder walks the front. The person , who pass out leaflets, distributes a handbill or a pocket tissue also. Each person carries the poster on his/her back. It is writing store’s name and the service contents. 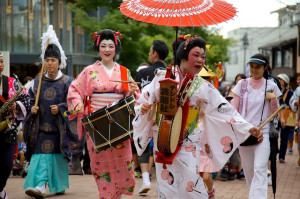 They have kept continuing the traditional performance since Edo period.