Traditional Japanese paper dolls known as Kyodo Ningyo have been loved by children for hundreds of years. Most Japanese dolls are made from paper, wood or clay, and painted with white chalk known as Gofun. Some of these hand-made Kyodo Ningyo display masterful attention to detail, and have been regarded as works of art since the post-war period.

Anesama Ningyo is a kimono-clad paper doll aimed at young girls that became popular during the Edo period. This simple yet elegant doll is made from washi and chiyogami paper, and was loved by the children of affluent merchants and samurai. What makes the doll fun is how her characteristics vary by region. 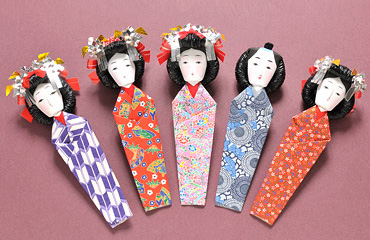 Shonai Anesama
The wives of the feudal retainers in the Shonai Domain started to make this paper doll to amuse themselves in the late Edo period. The Shonai Anesama includes both female and male dolls, and children would dress it up, play house and use it during the Girl’s Festival. 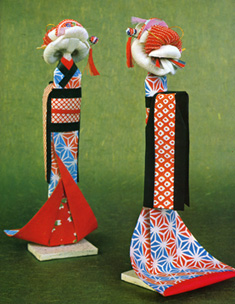 Edo Anesama
The traditional Japanese Nihongami hairstyle varies according to a person’s social status, occupation and age. Because of this, it is easy to see whether the Edo Anesama doll is a geisha or a merchant’s daughter. The doll’s appearance imitates the reality of the Edo period. The merchant’s daughter doll is portrayed with an aura of innocence, the geisha with flair, and the feudal lord’s daughter with elegance. 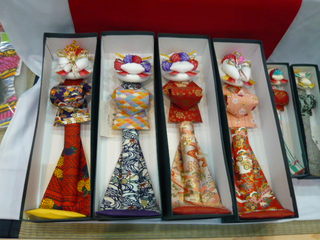 Shizuoka Anesama
Shizuoka Anesama originated near the castle in the Sunpu Domain and was also affectionately known as Hiinakko (‘dollie’). The Shizuoka Anesama is believed to be based on a courtesan, although she wears her hair in an unusual manner. Her kimono is made from Edo chiyogami and Echizen chiyogami paper, and her charm lies in her tall posture and refined backside. 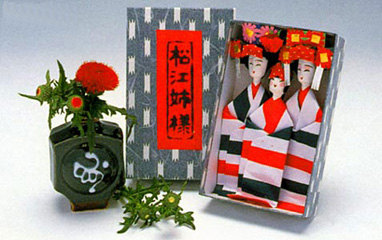 Matsue Anesama
Matsue Anesama is believed to have originated as a way of amusement among the daughters of samurai families and the women in the harem of the feudal lord in the Matsue Domain. She is one of the paper dolls that date back to the Edo period. Although her kimono is only a simple red and green, her beauty is bewitching. Matsue Anesama comes in a set of three sisters that represent a woman’s journey from a child into a young girl into a bride.