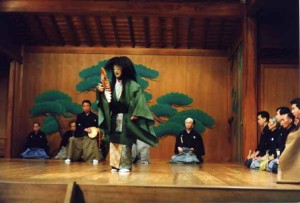 The Nou is one of the Japanese traditional entertainments and performing arts and is a singing and dancing drama completed in the Muromachi (approx 1337~1573) era. Kanami developed the Sarugaku Nou , and the paitronise by Yoshimitsu Ashikaga was completed. The Sarugaku Nou was developed by Kanami. By being patronised by Yoshimitsu Ashikaga, it was completed.

In Tokugawa shogunate government Era, it was considered to be music and the dancing used for the ceremony of official affairs.

A Nou-mask is for a main actor and a supporting actor using in Nou. It’s used to express God ,fearful god or vindictive spirit in a play. In addition, it’s used when playing a woman needing aesthetic expression.

The No-mask can be classified roughly, old man series, fearful god series, woman’s face series, man’s face series and vindictive spirit series. There are around 70 kinds of basic forms , when they classify it by a name. If it classify more details, there are more than 200 kinds of it. 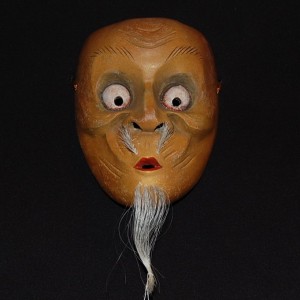 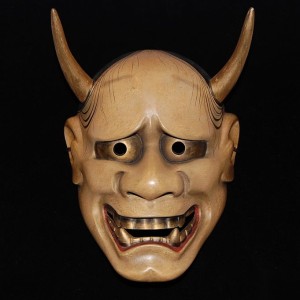 It becomes the custom to copy the well-known mask, which inherit from the shogunate and daimyos. Or the head master of a school owns the “basic of mask” becoming the standard. A mask and the attire used for each music are decided as a rule of the Nou. So the creative new mask was not required.

A shogun, general in Azuchi Momoyama (1573～1603), Hideyoshi Toyotomi liked Nou a lot. The artistic value of the Nou-mask was up, and the daimyos started to collect Nou-masks with enjoyed appreciating of the Nou. However, the Nou came under influence with the decline of Tokugawa shogunate government (1603~1868).
The house of a hereditary traditional craftsman of the Nou mask had been extinct in Meiji era.