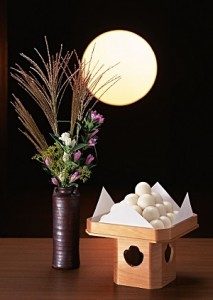 My family liked the moonlight watching around Jyugoya festival. We decorated rounded Dango (sweet rice dumpling) and Japanese pampas grass beautifully at balcony. I often asked my parents many times that “ why do you decorate sweet rice dumpling to moon?” . They answered that because moon is visiting and eating it. After hearing that, I keep staying around balcony so I would like to see moon is coming my home.  It was never happened but I believed it for long time until becoming teenager.

Whati is a Jyugoya?
The Jyugoya, the night with a full moon, is a kind of the moonlight watching. It’s a common name of the harvest moon. The harvest moon is a meaning of middle of autumn. From July to September was an autumn in old time, so middle of autumn is 15th August. The day is a best day of  the full moon.  So Jyugoya is a custom of watching this full moon. 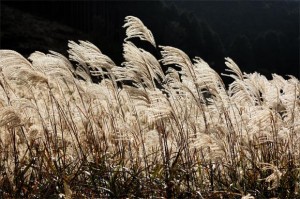 Why we should do
The custom of the moonlight watching came from China.The first time, only people of upper class was enjoying. Then slightly the event spread out to general people.

There are many raining and typhoon in early autumn. in middle of autumn, dry windy is blowing from continent. So the season is mostly sunny and clear air. It’s able to watch beautifully moon in this season.

Later on, it was combined the moonlight watching and the harvest festival. People enjoyed watching moon and started decorating offering thing for thanks and supplication.

The decoration of Jyugoya
The main offering things for the moonlight watching is a dumpling, a Japanese pampas grass and a rabbit.

People see a rabbit pounding mochi (rice cake) in the full moon in japan. So the rabbit becomes the indispensable symbol on a night with a full moon.

I have ever done the moon watching since I moved to Australia.  It should do again this activity for my children.