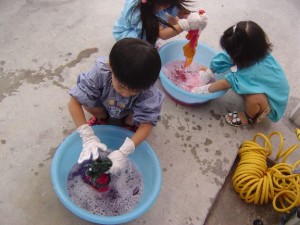 My image of Shibori zome is a kind of activity for children. In kindergarden or school. we enjoyed this activity part of art or science class.

I met an Australian woman last year. She is a activist as supporting aborigine people by marking Shibori zome with them. They can earn money from sales of their hand made Shibori zome products. 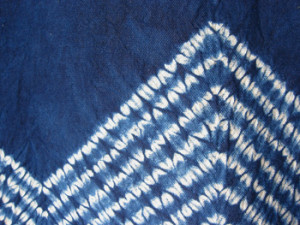 It’s so unique so the traditional Japanese dying method meet the aborigine culture. I am so exiting to see their work. Also after meeting her, I feel I should research about Shibori zome!!

Shibori zome, or tie-dye, is a dyeing method to represent a pattern by preventing the penetration of dye into certain parts of the cloth using techniques such as tying the cloth with thread, sewing, or by tightening it on to a 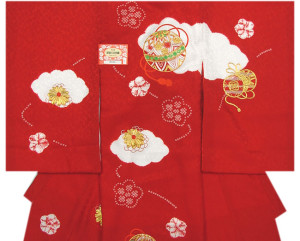 wooden plank. It is said that there are more than 100 techniques for this method just in Japan. The unique textures created by the irregularities and stereoscopic effects on the surface of the fabric, bleeding of the dye, and the extent of blurring — all of these contribute to the intricacies of Shibori zome. Thus, no two Shibori zome are ever the same, since 100 cloths dyed gives rise to 100 different and unique products.

This is an important feature of Shibori zome. It has a long history, with its origin said to be India. 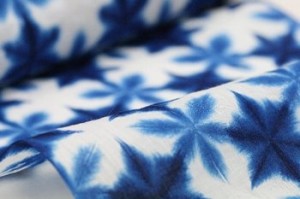 It was transmitted to Japan through the Silk Road in the 6~7th century. Thereafter, along with the development of Japan’s staining techniques, the “Tsuji flowers (Tsujigahana)” pattern was developed featuring mainly sewing apertures in the “Azuchi, Momoyama period,” followed by completion of “Kanokoshibori” which featured the extremely exquisite “Hikita” pattern on entire surfaces, proving sophisticated development of the art. Particularly, the technically spectacular “Kyo-Kanokoshibori,” which originated in Kyoto, later established its solid position in the Shibori zome world.