It is said that the origin of Aizu Cotton dates back 400 years to the Tensho Period, when the feudal lord of Aizu, Gamo Ujisato, encouraged the cultivation of cotton in order to promote production.

In the 20th year of the Kan’ei Period (AD 1643) the feudal lord at that time, Hoshina Masayuki, encouraged the cultivation of cotton and gave an official recommendation to have his 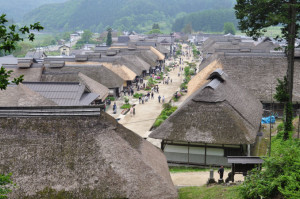 retainers’ wives produce textile as a side business. The farmers of Aizu produced a lot of indigo dye as a secondary product, so the farmers’ wives would make use of the winter period to spin thread as a source of income.

At the end of the Meiji Period Aizu cotton experienced a golden age, which then spread into and across the whole Taisho period. However at the beginning of the Showa period, 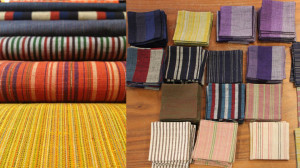 production fell sharply because of a sudden drop in demand.

In more recent times, there remain a mere two companies that shoulder the production of Aizu Cotton. Both in Fukushima Prefecture, one of them; Harayama Textile Factory, is located in Hiyoshi-machi, Aizu-Wakamatsu City. The other; Yamada Cotton Textile, is 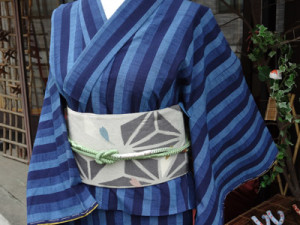 The fabric is a robust, plain woven cotton, so is highly-resistant to shrinkage. The fabric is thick and has a plump feel to it, and for this reason it has been widely used as a material in work clothing for centuries.

More  Fukushima and Tohoku, Northeast, stories
Concept of the Charity Exhibition
The Soul in It Revives As Other Products
Support of Tohoku Earthquake Victims
Fukushima’s handicraft textile, Aizu cotton
History of Oobori Soma Pottery
Legend of the Aka Beko, Red Cow
Women in Fukushima, struggling to come to terms with lives