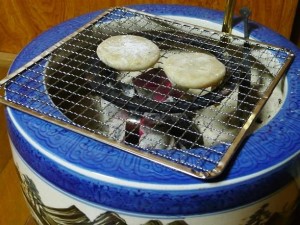 A hibachi is a Japanese traditional heating device in which charcoal is placed on top of a base of ashes. While a hibachi cannot be expected to heat up an entire room, it will serve to lessen the cold to some degree for those sitting or standing near one. In contrast to Japan’s wood-burning irori, hibachi use charcoal as fuel and do not create any smoke and they are fine for use indoors. Generally, people warm their hands or feet with a hibachi, or they are used for grilling rice cakes or boiling water. These days, in the age of more developed heating devices, hibachi are used less for their original purpose and more as an item of interior decoration that will add character to a Japanese style room. Some people use it as fishbowl for pet gold fish. 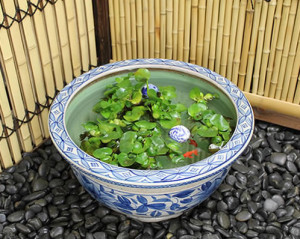 <How to use?>
Fine gravel is placed in the very bottom, and this is followed by coarser sand, then the ash from burnt straw. The burning charcoal sits on the very top. The ash takes up about 2/3rds of the whole volume.

The inside of a hibachi is made from metal such as copper, while the outside may be made from any of four materials: ceramic (such as with Seto hibachi), metal (kana hibachi), wood (box hibachi or long hibachi), or stone. 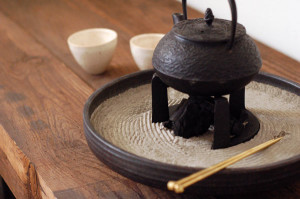 Metallic chopsticks are used for moving or leveling the coals. When boiling water on a hibachi, the pot is placed on top of a metallic stand known as a gotoku, which stands on top of the coals.

More about Japanese Traditional interior
History of Folding Screen
Superior Japanese Material, Tatami Mat
The Kakejiku is the Representative interior Decoration of Japan
The Art of Japanese Incense
The Family’s Buddhist Altar, Butsudan
Wind Chime is a Taste of Summer in Japan