My friend, Yuki came from Japan to Sydney end of January 2011.

I met her when I was 19 years old at that time, she has already had a dream which she would like to live in Okinawa.

The sound of Okinawa guitar swing and song voice presents listener imagination of  big and small wave in Okinawa.
Okinawa is island and the culture is strongly related to oceans. Listener feel relax and like been the part of the tide.

My husband, Australian, loves the music because famous Japanese musician, Ryuichi Sakamoto often captures and uses this folk music many times.
However, without Japanese culture fun, most of people don’t know this beautiful and traditional culture music.

I set up for Yuki to play this music in Japanese festival 28th of January in Manly
and The World Bar in Kings Cross in Sydney while she staying Sydney.
Hope people enjoy her music and someone start interesting of it.

In the case, I write Yuki’s Profile:

The photo image as below is a Yuki 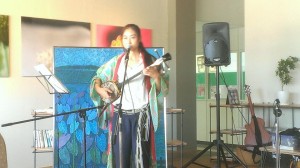