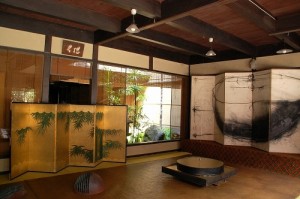 The holding screen has been already used as a tool of the protections from the wind at Han Era in China.
It was changed into the luxurious personal ornaments of imperial family afterwards.

In that time, the screen wasn’t such a Japanese one.
It had been changed as Japanese style, frame is tree and using materials are silk and Japanese paper
those are able to fold.

In this period, folding screen was so highly prized by foreigner.
So luxury and gorgeous gold folding screens were made a lot and exported as gift
between Azuchi Momoyama Era and Edo Era.

The screen have been gradually established as a great art especially around
Azuchi Momoyama Era and Edo Era. 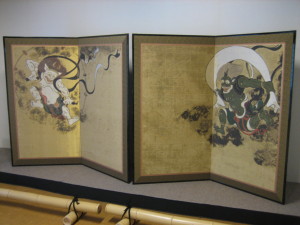 In the case of the screen of the Japanese painting, often describes the change of the season
from the right to the left.

It is produced on a premise that the screen is folding.
So a three-dimensional impression is created to the picture by holding it. 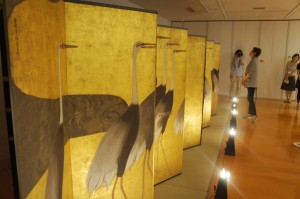 It is devised by a looking person to be able to enjoy it variously.

These days some Japanese traditional ceremony or event, tea ceremony, wedding ceremony
and doll’s festival are using the screen for decoration. 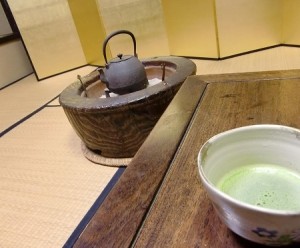