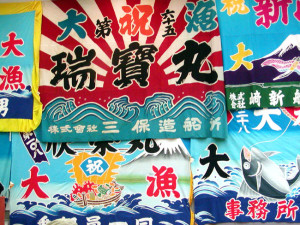 In the old time, the ship of fisherman raises the Tairyo flag, big catch flag, as a sign of the big catch.

Because, there are no information system to let know the result of catch at that time. Also, it’s important to notice people, who is  waiting the ship before landing. Those people see the sign and prepare the fish box or salt as they should handle the fish while it’s fresh.

The illustration or pattern of the flag uses a crane, a tortoise and the sea bream for wishing of the big catch. Those creature are common lucky symbol in Japan. 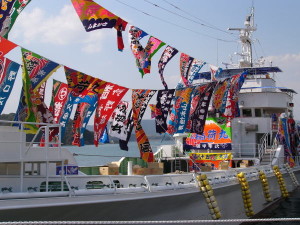 The big catch flag has showy bright coloration as it’s necessary to attract attention from the offing distance. However, raising the flag on the ship is being uncommon scenery these days. The raising flag is only for a new year’s first shipping or a maiden voyage. 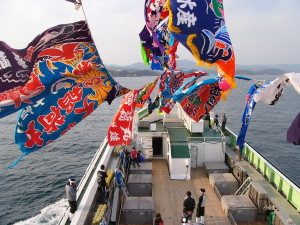 The big catch flag started using at Edo Period
(1603 -1867) . At that time, the sign of big catch was only raising a straw mat. The flag which dyed the name or the name of the ship gradually came to be used.

People said origin of the big catch flag is that fishermen’s boss distributed gorgeous kimono to a boatman, when the big catch at Choshi harbour in Chiba prefecture. The colourful kimono changed as the flag later. 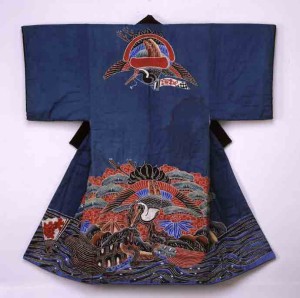 The contrast of the figure of the ship and big catch flag, while drawing a white wavy line on the blue sea, is beautiful.