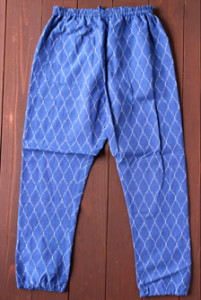 When I lived in Brunei, I often wore Monpe styled pants after Jungle walking. As I remember that most of the members of jungle walking club were wearing this pants. It’s easy wear and comfortable especially after sweating .

”Monpe is a pair of work pants for women and a sort of “Hakama” (a formal divided skirt for men) in Japan. They’re characterized by loose-fitting waistline and drawstring hem around ankles, and suitable for activities as one can tuck in one’s hem of kimono or outerwear.” some of parts by Wikipedia 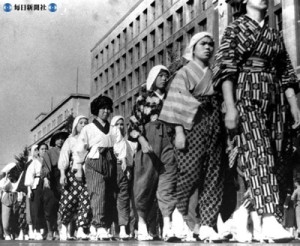 It’s possible to put the hem and the jacket  into and it’s suitable for activity. People also call it “Moppe” or “ Monpei”. They’re usually made of fabrics, such as wisteria, kudzu, hemp and so on. ”In ancient times, they were also made of leather, but later on, they’re mostly made of cotton.” some of parts by Wikipedia

It was used for labor, working clothes as a Hakama to wear over a kimono in the Tohoku districts in old days. 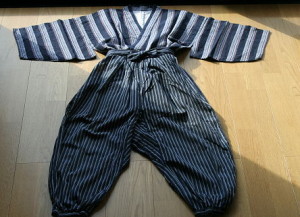 All over the Pacific War, it was recommended as “the Monpe, propagandism” in women’s organisation by the Ministry of Health and Welfare.

“With the deterioration of the war, women were obliged and nearly forced to wear them to defend themselves from air raids (Men were already issued the designated “kokuminfuku” (national uniform) before that).” some of parts by Wikipedia 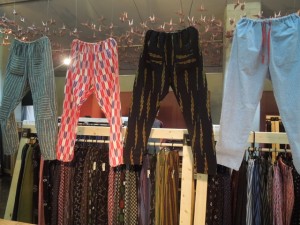 Those durable materials, striped cotton cloth and the indigo cloth with splashed pattern, were used on this occasion.

Some people use the silk cloth which made over the kimono for formal occasion. There were the history that  the nation half forced to wear Monpe, loose trousers.

Thus, the Monpe sometimes is used as symbol of the very bad life standard in the war time.