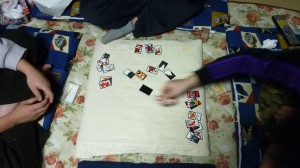 Hanafuda are a type of traditional Japanese cards and is also the name of a traditional card game. Hanafuda cards are distinctive because of their motifs, which feature Japan’s four seasons and the beauties of nature. In general, hanafuda is associated with gambling, but this image is not so strong these days, it is definitely a very popular pastime. 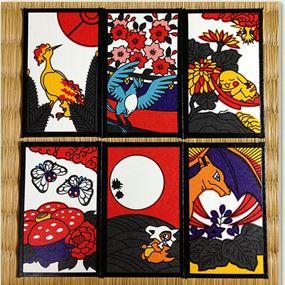 Hanafuda motifs are designed, and have been incorporated into the designs of all sorts of contemporary products. Also, taking advantage of the many motifs in hanafuda cards, sets of cards incorporating images of characters from animations and games are also produced.

On the other hand, hanafuda that were played in regional Japan in the olden days were not produced in great quantities, and perhaps due to this fact, there are many types for which we no longer understand the game rules. It is thought that there were once many different ways of playing hanafuda, but many of these rules have disappeared as they were not handed down. 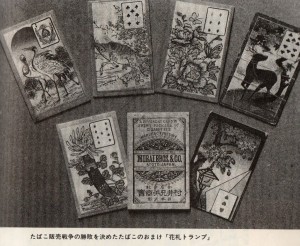 It seems that the design of hanafuda cards were a reference to the “hana-tori awase karuta” of old. However, if we trace hanafuda’s history back further, we can find its origins in “unsun karuta.”

Unsun karuta are cards that were brought to Japan from Portugal on a Dutch ship during the Tensho era of the Azuchi-Momoyama period (1573–92). The Portuguese for unsun karuta is “un summo carta.” “Un” means “one,” while “summo” means “superlative.”

The unsun karuta that arrived during the Tensho era were known as “tensho karuta.” With a total of 48 cards divided into suits of 12, tensho karuta were played much like western playing cards. 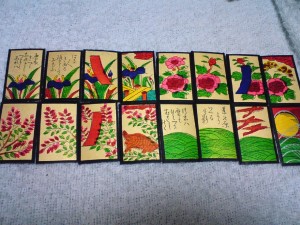 Later, in the Edo period, cards made of paper became popular (for gambling) in Japan’s towns and cities. The Edo Shogunate banned them repeatedly, but the cards were re-designed each time, and re-appeared among the populace. The ban on cards during the Edo period had the reverse effect of giving birth to many types of cards!