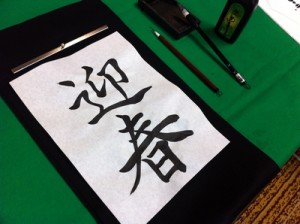 “Kakizome,” the first calligraphy writing of the year is described as a tradition of writing or illustrating something for the first time in the New Year, on January 2nd. Long ago, January 2 was known as the day for the “beginning of things” or the “start of work,” and it was a custom to pray for a reasonably good year of work, safety in the workplace, and improvement in skills. 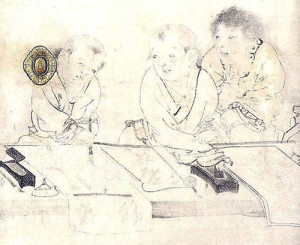 This day of first writing is also significant in meaning as a prayer for improvement in calligraphy and illustrating skills.

The first writing was originally held at the Imperial Court. It was called “kissho hajime,” and involved a ritual of rubbing ink using water drawn in the early morning of the New Year, and writing poetry in the lucky direction of that year. The practice became 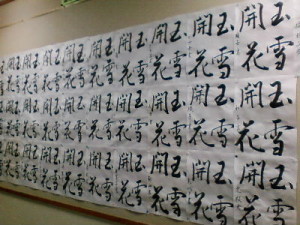 popular among the common people with the spread of temple schools(places to learn reading, writing, and arithmetic skills) during the Edo period.

The pieces of writing made during the “kakizome” ritual are burned on January 15 in a practice called “dondo-yaki(New Year’s bonfire).” During this custom, it is said that as the flames rise high into the air, that your calligraphy skills will similarly rise and improve.